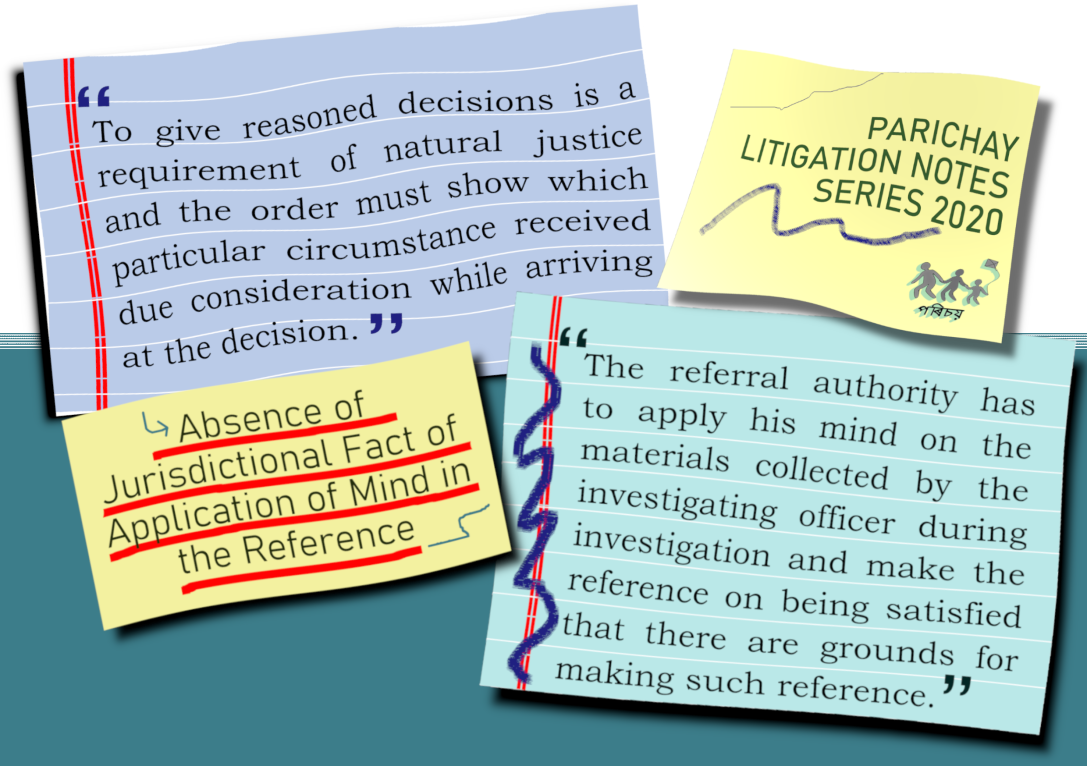 This research note is part of Parichay’s ongoing project to study, track, and publish key propositions and latest developments in citizenship law and adjudication in India.

In the case of Satpal v. State of Haryana (AIR 2000 SC 1702), in the context of the pardoning powers of the Governor under Article 161 of the Constitution, the Supreme Court held that the decision-making authority must be apprised of the materials facts in the case to demonstrate proper application of mind.

The appropriate authority must be personally satisfied as to the grounds on the basis of which the decision is taken. For example, in the case of Jaganath v. State of Orissa (AIR 1966 SC 1140), an order of detention under rule 30(1) (b) of the Defence of India Rules was challenged on the ground that it was as not based upon the satisfaction of the Government. The Supreme Court observed that in the order of detention, six grounds were verbatim reproduced from the relevant empowering section, whereas the affidavit of the Minister who issued the order indicated that he was “personally satisfied” of only two out of the six grounds mentioned in the order. The Supreme Court ruled that the Minister had acted mechanically in passing the order and quashed the order of detention.

As per Section 147 of the Income Tax Act, 1961, the Income Tax Department has the power to reassess an individual’s previously filed income tax returns by sending a notice under section 148 of the Income Tax Act, 1961 along with recording one’s satisfaction that the income has escaped assessment. In Joint Commissioner of Income-Tax v. George Williamson (Assam) Ltd. (2002 SCC OnLine Gau 351; (2002) 258 ITR 126; (2003) 181 CTR 69), a Division Bench of the Gauhati High Court held that in the absence of specific material before the assessing authority and any independent enquiry, there did not appear to be a link between the facts found and the satisfaction arrived at by the assessing authority. It was accordingly held that there was no application of mind to the facts alleged to have been found, and the action taken was quashed as being not maintainable in law. Similarly, in the case of Pr. CIT vs. G & G Pharma India Ltd. ((2016) 384 ITR 147 (Del.)), the Delhi High Court held that application of mind by the Assessing Officer to the material produced before issuing the notice for reassessment was a basic jurisdictional requirement for reassessment. Without analysing and forming a prima facie opinion on the basis of the material produced, it was not possible for the Assessing Officer to conclude that he had reason to believe that income had escaped assessment. For other High Courts, see Yuvraj v. Union of India ((2009) 315 ITR 84) [Bombay High Court Division Bench]; Kamala Properties v. Inspecting Assistant Commissioner of Income Tax, Special Range-IV Calcutta (1992 SCC OnLine Cal 124; (1992) 2 CHN 295) [Calcutta High Court Single Judge].

In Anirudhsinhji Karansinhji Jadeja v. State of Gujarat ((1995) 5 SCC 302), a three-judge bench of the Supreme Court quashed proceedings initiated under the TADA for the reason that the sanction granted by the State Government for the prosecution was without the proper application of mind. It observed that the State Government merely followed the advice of the Deputy Superintendent of Police without any independent application of mind to the facts and held as follows:

“[14] The present was thus a clear case of exercise of power on the basis of external dictation. That the dictation came on the prayer of the DSP will not make any difference to the principle. The DSP did not exercise the jurisdiction vested in him by the statute and did not grant approval to the recording of the information under TADA in the exercise of his discretion.

[16] For the aforesaid twin reasons, we state that the entire proceeding against the appellants under TADA is vitiated and the same is, therefore, quashed.”

The Parichay Blog and Newsletter Team View all posts by parichayteam